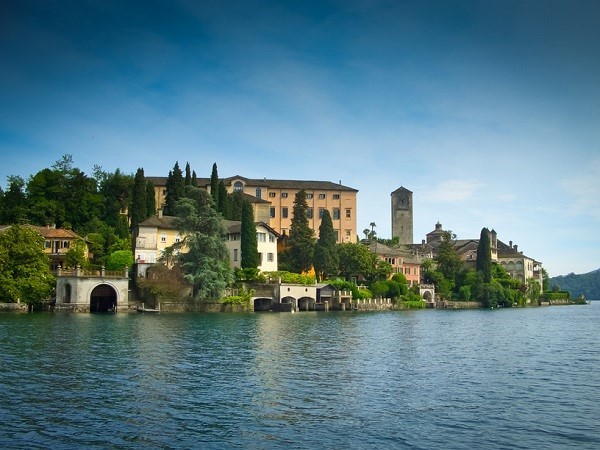 You may not know it, but the quiet and beauty Orta lake has inspired many writers throughout history. Think of Gianni Rodari who was born in Omegna, at the north end of the lake.

Or the immediate hinterland of Miasino, Ameno, Armeno, Bolzano Novarese, Madonna del Sasso, were travel destinations and the subject of chronicles and stories. It is no coincidence that in the nineteenth century it was almost obligatory to consider it as one of the most evocative stages of the “Grand Tour” of many aristocrats from beyond the Alps. Honoré de Balzac, who had been there, described it as follows in the “Comédie humaine”: “A delightful small lake at the foot of the Rosa, an island well located on very calm waters, flirtatious and simple, (…). The world that the traveler has known finds himself in a small modest and pure: his refreshed soul invites him to stay there, because a poetic and melodious charm surrounds it, with all its harmonies and awakens unusual ideas …. the lake, both a cloister and life…. “.

It is the lake that, especially in autumn, reflects the colors of the season and becomes a little melancholy, suggesting to poets like Eugenio Montale to dedicate compositions to him or to Ernesto Ragazzoni to write these lines: “In Orta, in a quiet room that opens above a green pergola, and where, at times, the wind like a breath brings a subtle rustle, like silk, there is a piano, dear, waiting for you, a piano where you will play me the music you love , and that you will want: some blessed page of ours ». An area rich in charm and literary references, an ideal destination for artists and writers, the localities around the lake often appear in the works of other important authors.

For Mario Soldati, a great director and writer, Orta is one of the places of reference, given that on the lake, precisely in the hamlet of Corconio, he began to write his first important books such as “America first love” and “The Jesuit friend”, as well as setting some pages of “The Marshal’s Tales”. Not to mention Achille Giovanni Cagna (with the novel “scapigliato” dedicated to the “Mountaineers Ciabattoni”), Mario Bonfantini (The temptation), Carlo Emilio Gadda (Gulliver’s travels), Laura Mancinelli with her sweet “La musica dell ‘island ”, Carlo Porta, Friederich Nietzsche. A centuries-old love that is destined to continue for centuries to follow.